For those of you wondering why I've been lax in the blogging department recently, there's a very simple reason. My mum and brother flew over to Thailand to spend some quality family time with me and my wife (and our dog), and the five of us are currently spending a couple of relaxing weeks in a rented house near the beach in a quiet little town just outside of Hua Hin.

Oddly enough, despite living in one of the world's most popular tourist destinations I rarely find time to actually enjoy the place as I'm usually at home writing - so this makes a nice change for me. Nothing to do but chill and catch up on all the books I've been meaning to read for so long. And although I'd planned to write another post in my GREAT 'FORGOTTEN' THRILLERS series while I was here, I find I just can't seem to muster the energy required. Too relaxed, I guess. Anyway, I'll do a new FORGOTTEN THRILLERS post in about a week's time, once I'm back in Bangkok, but until then you'll just have to make do with a shot of the view from our front porch... 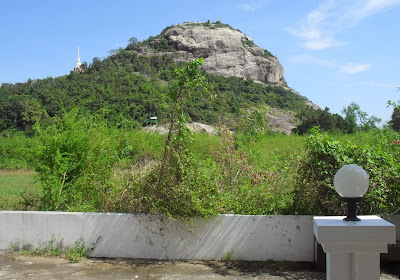 Not a bad way to start each day, is it?

Posted by Jason Dean at 1:37 PM No comments: 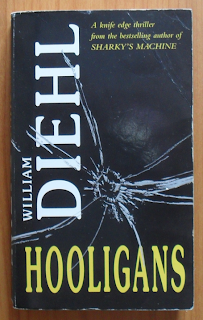 So after a brief hiatus, we're back with another entry in my 'Forgotten Thrillers' series - and this time I take a look at a classy offering from an old fave of mine, William Diehl. Now I think the first time I ever came across Diehl's work was probably around 1981 or 82 when I saw the excellent Burt Reynolds movie, 'Sharky's Machine' (based on Diehl's first novel), at my local cinema. A tough, gritty cop thriller set on the mean streets of Atlanta really wasn't something you expected from Reynolds, who generally specialised in good ol' boy crap like 'Smokey and the Bandit', 'Cannonball Run' and 'Stroker Ace', so I was as surprised as anybody when the movie turned out to be as good as it was.

And it still is, actually. If you haven't seen the movie you should find yourself a copy and check it out. Despite being made in 1981 it's actually a great example of a 'seventies thriller,  with Reynolds - who directs as well as stars - on top form as the titular character. The guy didn't make too many notable movies during his long career, but this one sits comfortably alongside his few other highlights such as 'Deliverance', 'The Longest Yard' and 'Boogie Nights.' Add a great soundtrack and an even better supporting cast - with Henry Silva a stand-out as the OTT villain - and you're onto a winner.

Anyway, it was some time after seeing this movie that I happened to notice a paperback on my Dad's bookshelf one day: 'Hooligans' by William Diehl. The name rang a bell so I pulled it off the shelf and right there on the front cover was the tagline '...from the bestselling author of SHARKY'S MACHINE.' Ah, so that's where I saw the name, I thought, and without further ado opened it to the first page and got stuck in.

The story focuses on Jake Kilmer, an agent for the Federal Racket Squad (or 'The Freeze'), who has been trying for five years to build a case against a cosa nostra family known as the Cincinnati Triad, but with little luck. This Mob then disappear off the face of the earth, only to show up again nine months later in Dunetown, Georgia. So Kilmer, who actually lived in Dunetown twenty years before, is sent in to find out how deeply the Mob's got its hooks into the area and is shocked to see how the idyllic backwater of his youth has been transformed into an unrecognisable mini-Vegas, complete with porno palaces, strip bars, casinos, nightclubs, and a racetrack.

Assigned to help Jake get to the bottom of things are a ragtag team of renegade cops known as the 'Hooligans', as well as a hotshot undercover fed who goes by the nickname of Stick. But then a professional killer starts systematically picking off local mob bosses in well-organised hits, and Kilmer and his team have to move fast in order to prevent open warfare erupting on the streets. And just to make his job that much more difficult, Doe Findley, the current wife of the town's most prominent citizen and the woman Kilmer loved and lost twenty years ago, shows up on the scene and decides she wants to renew their relationship...

Now those of you who've read my previous entries might remember that I originally planned to post about another one of Diehl's, called 'Thai Horse', but chose not to when I realized it wasn't actually all that good, thus defeating the whole object of the exercise. Fortunately, 'Hooligans' more than makes up for that temporary lapse in judgement. Despite being an unapologetic 'guy's book,' this still stands up as an impressive hard-boiled crime thriller with a strong lead character, a memorable cast of supporting players, and some neat twists along the way.

Oddly enough, it was only after reading it for the second time that I realized 'Hooligans' also fits nicely into that previously discussed niche category of 'Novels that are heavily influenced by Dashiell Hammett's Red Harvest'. Somebody else - I can't remember who - once referred to these kinds of books as 'Town-Tamer' novels. That is, a hero rides into a crooked town or city, and decides to rid it of its corrupting influences by setting the various factions at each other's throats and then picking off the survivors. And this is essentially what Kilmer does in this novel. The only real difference is he's not working alone - he's got a whole squad of law enforcement outcasts to back him up. Nevertheless, he does spend much of his time fending off the so-called town elders, who turn out to be just as corrupt as the Mob they helped bring into town. It's even got a femme fatale in the form of Kilmer's long-lost love, Doe, who seems to jump in and out of Kilmer's bed whenever it suits her.

There's also a nice little bit near the beginning of the book, as Kilmer arrives at the airport, that put me in mind of Hammett's unforgettable 'Personville/Poisonville' opening paragraph in 'Red Harvest':
In the time it took me to walk the length of the terminal and pick up my bags, I saw a first-class dip from Albuquerque maned Digit Dan Delaney, two hookers from San Diego whose names eluded me, and a scam artist from Detroit named Eddie Fuereco, spinning the coin with a mark in a seersucker suit and a Hawaiian shirt.
They were all working. That told me a lot.

Now I've read all of Diehl's novels at one point or another and as much as I've enjoyed them, I have noticed a major fault in his writing. Actually, two. The first is his tendency to constantly hop between characters' POVs. Often in the same paragraph. Admittedly, this is more a personal peeve than anything else, but I've always found it really distracting when you're following the thoughts of one character only to suddenly switch to another character's viewpoint without any kind of break between the two. It really takes you out of the book. And that was one of the reasons I wasn't too impressed with 'Thai Horse' upon reading it again - Diehl did a lot of POV-hopping in that one. Added to which, his plots are often far more complicated than they need to be.

But here Diehl manages to avoid both those shortcomings by writing in first person for much of the novel (perhaps in another tip of the hat to 'Red Harvest' - who knows?). Other than the occasional foray into the mind of the assassin as he prepares to pick off another Mob enforcer, here the reader only feels what Kilmer feels and sees what he sees, and as a result it's a lot easier to keep track of what's happening throughout the story. Especially as there are so many sub-plots and minor characters to contend with.  Diehl also comes up with some choice dialogue scenes in this one too. Actually he's always been pretty reliable at that kind of thing, but in this one you can tell he's really enjoying himself - such as when he recounts the first meeting between Kilmer and the town gossip, Babs Thomas:

'Jake Kilmer,' she said. 'Why do I know your name?'
'It's fairly common.'
'Hmm. And you're a cop,' she said.
'Kind of.'
'How can you be kind of a cop?'
'Well, you know, I do statistical profiles, demographs, that kind of thing.'
'You're much too cute to be that dull.'
'Thanks. You're pretty nifty too.'
'You're also an outrageous flirt.'
'I am?' I said. 'Nobody's ever complained about that before.'
'Who's complaining?' she said, dipping her head again and staring at me with eyes as grey as a rainy day. I passed.

But lest you think it's all fun and games, it's worth mentioning the nice underlying melancholy running throughout the whole novel that helps sets it apart from its hard-boiled brethren. Like the obviously doomed love affair between Kilmer and Doe, for example, with both characters constantly regretting the missed opportunities and bad choices they made twenty years ago. In fact, their relationship actually ends up as one of the book's more absorbing subplots, which is pretty uncommon for a cop thriller.

After 'Hooligans' Diehl went on to write a further half-dozen thrillers of varying quality before his death in 2006 - including 'Primal Fear', which was later turned into a successful movie starring Richard Gere. With the exception of the aforementioned 'Thai Horse' I'd say all are worth reading, but those wishing to seek out his very best work should really try his debut novel, 'Sharky's Machine' (Dirty Harry Goes To Atlanta), 'The Hunt' (AKA '27') - a fine chase thriller set in the opening days of WWll - and his final novel 'Eureka' - a great period murder mystery that manages to span four decades.