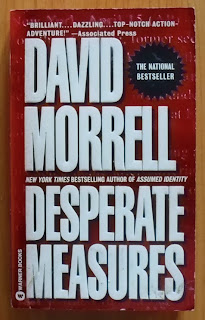 For better or worse, author David Morrell will forever be known as the man who created John Rambo, one of the central cultural touchstones of that decade we all love to hate - the gung-ho 'eighties. Doesn't matter that First Blood - actually written in 1972 - was the only book of his to feature the disturbed Viet Nam veteran (if you don't count the movie tie-in adaptations Morrell penned for the sequels - which I don't), it's Rambo who he'll be best remembered for, regardless of the two dozen novels he's written since. Which is kind of a shame as there are some real doozies tucked away in his bibliography, and some of them quite recent.

Now I have to say I've never been much of a fan of Morrell's 'eighties output, which, along with the aforementioned movie adaptations, seemed to consist of interchangeable conspiracy thrillers with titles like The Fraternity of the Stone, or The Brotherhood of the Rose, or The Something of the Something Else. I tried a couple back in the day - no idea which ones - and didn't come away all that impressed. But then in 1990 Morrell came out with the highly entertaining bodyguard thriller, The Fifth Profession, and it was at that point that Morrell seemed to really hit his stride. For the rest of the decade he produced one high quality thriller after another, and all with catchy two-word titles like Assumed Identity, Extreme Denial, Double Image, and Burnt Sienna. And right in the middle of this run, in 1994, came Desperate Measures.

The story starts off intriguingly enough with a deeply depressed man planning his own death. Matt Pittman is an ex-current affairs journalist for the Chronicle whose life has gone steadily downhill since the death of his 12-year-old son from bone cancer seven years before. His wife's left him, he's on the verge of alcoholism, and instead of reporting on current events, he's now relegated to writing obituaries. Or he would be had he not already quit. By the time the story begins he's finished settling all his affairs and is preparing to end it all with a bullet in his brain. However, just as he's about to pull the trigger the phone rings. And keeps ringing until Pittman gets out of the bathtub and answers the damn thing.

It's his editor, Burt, at the Chronicle, who explains that the paper's bankrupt and is to close in a week. And with most of the staff out looking for new jobs he asks Pittman, as a favour to him, to lend a helping hand in the obituary department for its last few days. Feeling that he owes Burt for his kindness during his son's illness, Pittman puts his suicide on hold and goes back to work, temporarily. And his first assignment is to write an obituary of a man who isn't actually dead yet, but will be soon: Jonathan Millgate, one of the 'Grand Counsellors' - five patrician diplomats who've helped manipulate US government policy behind the scenes for decades. But in the process of researching the man's history, Pittman comes across some sensitive information that causes Millgate's death and he soon finds himself on the run for murder. Chased by the police and any number of professional assassins, Pittman gradually comes back to life again as his old reporter instincts kick in and he decides to find out for himself why so many people are desperate to kill a man who wanted to die anyway...

With Desperate Measures, Morrell has constructed an entertaining 'ordinary man in extraordinary circumstances' conspiracy thriller, only with an extremely sympathetic character in the lead role. Right from the first paragraph, the reader is on Pittman's side as we learn how he's determined to exit the world with the minimum amount of disruption to his neighbours. Which means sitting in his bathtub with the shower curtain pulled across to keep the mess down, and arming his 9mm automatic with a single bullet to ensure whoever finds his body won't be picking up a loaded gun. I ask you - how can you not warm to a person who's that considerate to his fellow man?

Actually, it's a good thing Morrell does make Pittman so appealing as the narrative stays with him for the entire novel, despite it being written in third-person. Which is interesting. As an author myself, I'm always paying close attention to how other writers construct their narratives and upon reading the book again I think Morrell was wise to avoid the obvious first-person POV here. It's a great narrative device that instantly allows the reader to connect with the story's main character, but the downside is you take away some of the suspense since the narrator can only be relating their story if they ultimately survive. So in Desperate Measures (as with the previously reviewed 'Nothing Lasts Forever') we get the best of both worlds, with a third-person limited perspective that allows the reader to empathise totally with Pittman without knowing for sure whether he'll still be breathing by the end of the book. So, win-win.

And it's a very fast-paced story too. With First Blood, Morrell quickly proved himself a master of the chase thriller and he constructs another variation on that theme here. We get to know Pittman and why he is the way he is, then Morrell drops the poor guy straight into the shit and by page 60 he's already running for his life. And despite spending much of his time trying to find out why everybody wants him dead, he basically doesn't stop running for the rest of the book. It also helps that Morrell divides the novel into small bite-sized chapters (usually between 2-5 pages in length), which, along with the terse no-nonsense prose, really helps the pages fly by.

But therein lies part of the problem. Morrell's decision to make this a pure adrenalin-rush of a novel with everything moving moving moving means he falls prey to one of the worst cliches of the genre. And I'm not referring to the introduction of Julia, the requisite romantic interest who's brought into the storyline about a third of the way in, either (Morrell actually handles the burgeoning relationship between the two of them in a nice low-key manner). No, I'm talking about how anytime Pittman and Julia visit another vital character or witness, the interview is almost always cut short by the arrival of either the police or a cadre of armed bad guys desperate to kill them all. Usually the latter. There then follows another fierce gun battle and/or a tense escape, whereupon our heroes lick their wounds and try again with the next person on their list. And this basically happens all the time.

Now there's nothing wrong with having the book's villains one or two steps behind the leads in a chase thriller - that's what makes it a chase thriller, after all - but it gets to a point in this one where the reader's waiting for the bad guys to show up at the door, which they invariably do, and that's really not good for a suspense novel. There's that famous line of Raymond Chandler's where he said that anytime you're at a loss have a man enter the scene with a gun - but I'm pretty sure he didn't mean keep on doing it. There's such a thing as overkill even in a formula thriller such as this, and an experienced author such as Morrell really should know better. And then there's the whole final act, which could have been structured a lot better. As it stands there's just too much exposition to explain away the previous 400 pages, and it's all stuff that really should have been rationed out in smaller doses beforehand.

But to be honest, it's really the character of Matt Pittman - rather than the plot - which makes this book stand out for me. As a man who's got nothing left to live for, at least at the beginning of the story, Morrell does a really excellent job in bringing the man's anguish to life on the page so that the reader can totally empathise with his situation. And this is perhaps not too surprising once you learn Morrell lost his own son to bone cancer in the late eighties, so it's clear the author is exorcising a few demons of his own in this one. There's a telling passage early on, for example, where you wonder if Morrell is actually describing himself during his darkest periods:

So he went home. Rather than take a taxi, he walked. He needed to fill the time. As dusk increasingly chilled him, he stopped for several drinks - to fill the time. The elevator to his third-floor apartment creaked and wheezed. He locked himself in his apartment, heard laughter from a television show vibrate through thin walls from the apartment next to him, and had another drink.
To fill the time.
He sat in darkness.

Not a bad little passage that - just a pity there isn't more like it in the book. But that said, Desperate Measures still remains one of my favourites of David Morrell's, and if you enjoy a good thriller with a hero who's a little different from the rest, I'd say it's definitely worth a look.


** On a final note, there's a film called Desperate Measures that was made in 1998, which as far as I'm aware has no official connection to the novel - there's certainly no mention of David Morrell in the credits, and the plot is admittedly very different. However, a major plot device in the movie has cop Andy Garcia frantically searching for a compatible bone marrow donor for his 12-year old son. Who's dying of leukemia.

Now call me cynical, but that strikes me as a little more than coincidental. And the only time I've ever seen Morrell mention it is in an interview where he said the book was 'not to be confused with the wretched movie of the same name.' Now I sense a certain amount of anger in that statement, which makes me think that the moviemakers simply decided to lift various plot points from the book - not to mention the title itself - without actually paying Morrell for the screen rights. Which, if true, sounds pretty underhanded, even for Hollywood.